Home
Products
About Us
Factory Tour
Quality Control
Contact Us

Easy to use, works as expected. Plug into USB3 port an in 15 minutes everything was running. This was done on a newly installed hard drive,.

It works perfectly so far.Will do great business with you.

When I booted my PC using the USB, it was working properly, and I installed Windows with no problems!

Simple to setup, Home edition is sufficient for most users. Comes on a nice USB 3.0 flash drive, which if you want can wipe and use for storage.

Windows 10 is designed to be compatible with the hardware, software, and peripherals you already own. And always-enabled updates help you stay current on features and security for the supported lifetime of your device.Windows 10 gives you absolutely the best experience for doing what you do. Stay focused with easy ways to snap apps in place and optimize your screen space for getting things done. See your open tasks in a single view and create virtual desktops to gain space or group things by project, like Office apps for work and games for play.Gaming just got even better with Windows 10. Not only do your existing games work great, but now you can play and connect with gamers across Xbox One and Windows 10 devices. From the best casual games to a new generation of PC gaming, Windows 10 is built for games you love.

When I upgrade a preinstalled (OEM) or retail version of Windows 7 or Windows 8/8.1 license to Windows 10, does that license remain OEM or become a retail license?

If you upgrade from a OEM or retail version of Windows 7 or Windows 8/8.1 to the free Windows 10 upgrade this summer, the license is consumed into it. Because the free upgrade is derived from the base qualifying license, Windows 10 will carry that licensing too.

- Includes transfer rights to another computer.

- Includes transfer rights to another computer.

- Expensive, but cheaper than full version

OEM versions of Windows are identical to Full License Retail versions except for the following:

What happens if I change my motherboard?

As it pertains to the OEM license this will invalidate the Windows 10 upgrade license because it will no longer have a previous base qualifying license which is required for the free upgrade. You will then have to purchase a full retail Windows 10 license. If the base qualifying license (Windows 7 or Windows 8.1) was a full retail version, then yes, you can transfer it.

If you want to upgrade to Windows 10 on your PC or tablet, here’s what it takes. 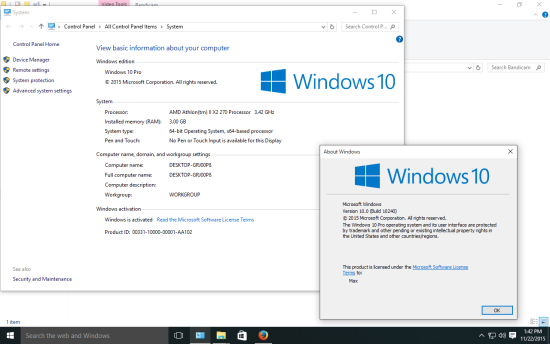