Home
Products
About Us
Factory Tour
Quality Control
Contact Us

Easy to use, works as expected. Plug into USB3 port an in 15 minutes everything was running. This was done on a newly installed hard drive,.

It works perfectly so far.Will do great business with you.

When I booted my PC using the USB, it was working properly, and I installed Windows with no problems!

Simple to setup, Home edition is sufficient for most users. Comes on a nice USB 3.0 flash drive, which if you want can wipe and use for storage.

1 . (Includes 32 & 64-bit versions) Combines remarkable ease-of-use with the entertainment features of Home Premium and the business capabilities of Professional--get it all with with Windows 7 Ultimate
2 . Make the things you do every day easier with improved desktop navigation; start programs faster and more easily, and quickly find the documents you use most often
3 . Run many Windows XP productivity programs in Windows XP Mode; watch, pause, rewind, and record TV on your PC
4 . Easily create a home network and connect your PCs to a printer with HomeGroup; connect to company networks easily and more securely with Domain Join
5 . Recover your data easily with automatic backup to your home and business network; help protect data on your PC and portable storage devices against loss or theft with BitLocker

1 . Get connected in three clicks wherever there's a wireless network connection.
2 . Keep documents on your PC and on network servers in sync automatically.
3 . Your PC will automatically use the printer you prefer for whatever network you're on.
4 . Simplify making presentations special settings that keep your PC from sleeping and turn off messages, notifications, and screen savers.
5 . Instantly locate virtually any file, email, or document on your PC just by typing a word or two.
6 . Get around your PC faster with the improved taskbar.
7 . Open programs you use regularly in one click and files you use regularly in just two.
8 . Manage lots of open programs, documents, and browser windows easily with thumbnail and full-screen previews of open windows.
9 . Manage multiple email accounts, including Hotmail, Gmail, AOL, and Yahoo! Mail Plus, all in one place with one simple program.
10 . Get to the files, photos, and music on any PC with Windows 7 in the house from any other.
11 . Print to any printer in the house from any PC with Windows 7 in the house.

Windows 7 is available in six different editions, of which the Home Premium, Professional, and Ultimate were available at retail in most countries, and as pre-loaded software on new computers. Home Premium and Professional were aimed at home users and small businesses respectively, while Ultimate was aimed at enthusiasts. Each edition of Windows 7 includes all of the capabilities and features of the edition below it, and adds additional features oriented towards their market segments; for example, Professional adds additional networking and security features such as Encrypting File System and the ability to join a domain. Ultimate contained a superset of the features from Home Premium and Professional, along with other advanced features oriented towards power users, such as BitLocker drive encryption; unlike Windows Vista, there were no "Ultimate Extras" add-ons created for Windows 7 Ultimate.Retail copies were available in "upgrade" and higher-cost "full" version licenses; "upgrade" licenses require an existing version of Windows to install, while "full" licenses can be installed on computers with no existing operating system.

The remaining three editions were not available at retail, of which two were available exclusively through OEM channels as pre-loaded software. The Starter edition is a stripped-down version of Windows 7 meant for low-cost devices such asnetbooks. In comparison to Home Premium, Starter has reduced multimedia functionality, does not allow users to change their desktop wallpaper or theme, disables the "Aero Glass" theme, does not have support for multiple monitors, and can only address 2GB of RAM.Home Basic was sold only in emerging markets, and was positioned in between Home Premium and Starter.The highest edition, Enterprise, is functionally similar to Ultimate, but is only sold throughvolume licensing via Microsoft's Software Assurance program.

All editions aside from Starter support both IA-32 and x86-64 architectures; Starter only supports 32-bit systems. Retail copies of Windows 7 are distributed on two DVDs: one for the IA-32 version and the other for x86-64. OEM copies include one DVD, depending on the processor architecture licensed. The installation media for consumer versions of Windows 7 are identical; the product key and corresponding license determines the edition that is installed. The Windows Anytime Upgrade service can be used to purchase an upgrade that unlocks the functionality of a higher edition, such as going from Starter to Home Premium, and Home Premium to Ultimate.Most copies of Windows 7 only contained one license; in certain markets, a "Family Pack" version of Windows 7 Home Premium was also released for a limited time, which allowed upgrades on up to three computers. In certain regions, copies of Windows 7 were only sold in, and could only be activated in a designated region. 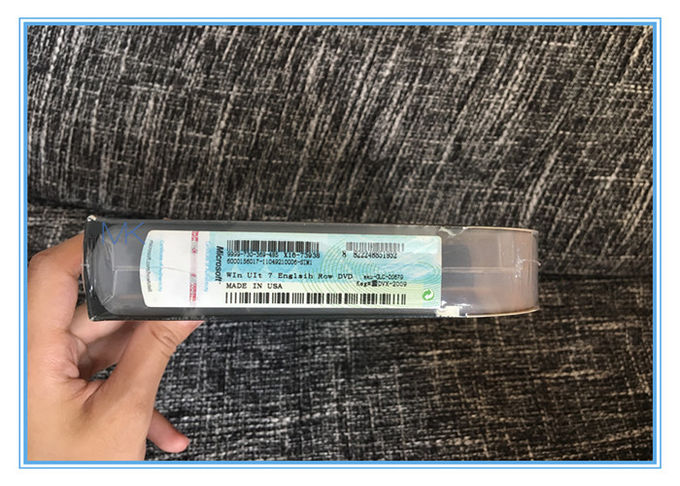